As one of our photos shows, a stretch of hoarding has appeared on the side of the former Bensons for Beds shop in the High Street.  It’s been there a week or more.  It doesn’t look very secure!

The building itself doesn’t look particularly happy either.  The rear ‘extension’ has been demolished.  We’re not aware of any recent approved planning application, although there is one outstanding from – at a guess – six or seven years ago. 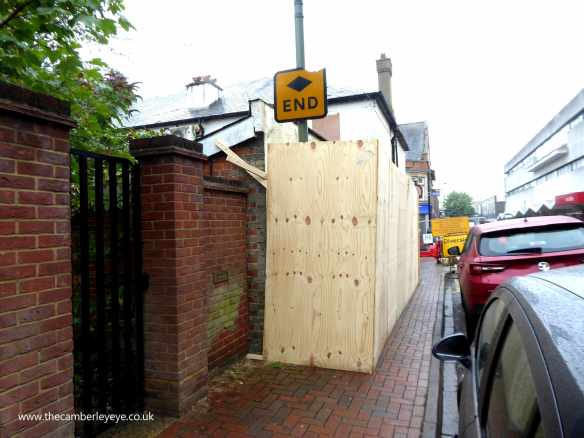 It’s about a year since we remarked that the redevelopment of the Hayward House site in Portesbery Road had virtually ground to a halt.  Since then, little has happened.  But walking past very recently, it seemed as if the site had been tidied up a little.  Is work going to restart??

If you look at the council’s website way back to 29th July, you can read “Following vandalism and anti-social behaviour reported at the Obelisk, the facility will now be locked daily from 4pm”

Roll forward just a little, and you’ll find people reporting that the obelisk site is closed all day.  So we went and had a look.  They’re right.  As our first photo shows, the security gate was well and truly locked at about midday yesterday.  The casual visitor can get no further. 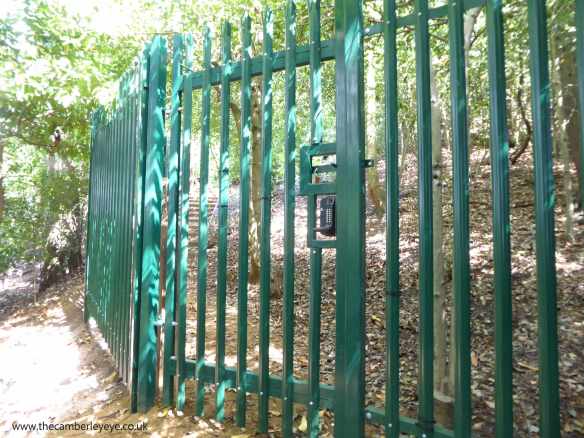 However, the good news for those who are fit, slim, and seeking ‘recreation’ is that we reckon it’s quite possible to squeeze under the security fencing, albeit getting a little sandy in the process.  From the look of it, we don’t think we’re the first person to have found that out either. It’s difficult to show a 3D gap in a 2D photograph, but here’s the best that we could manage.

However much the council paid for the fencing, we reckon it doesn’t – and certainly won’t – serve its purpose.

The council had changed its mind by 5th August.  The website had been altered by then to read:

“Due to ongoing problems with anti social behaviour and vandalism, the area around the Obelisk in Camberley Park has been locked to protect his Grade 2 Listed structure. 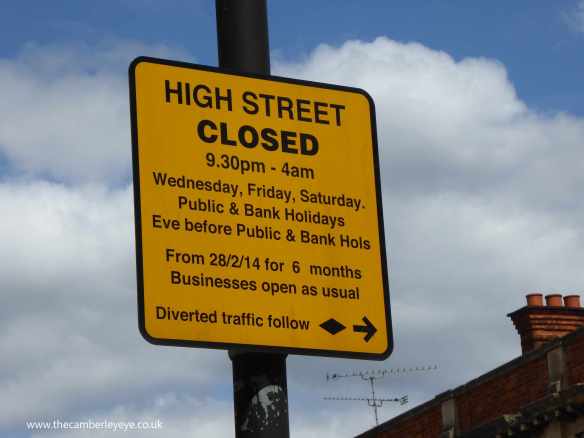 Yesterday we spotted some activity outside Compass House – or, at least, the office block on the A30 that used to be called Compass House, and which is being converted into flats.  At first we thought the old ‘offices to let’ signs were being removed.  But we now thing that a couple of flagpoles were being erected.  The flags bear the name Seymours – the estate agents in Park Street.

We haven’t walked by Bill’s in Park Street for a couple of days.  But we’ve not noticed any signs of life in there recently.  Will it be re-opening? 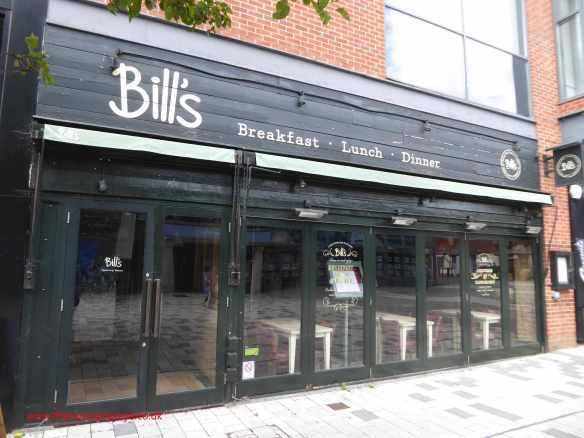 We’re re-posting this morning’s item.  For some reason beyond the control of the Eye, the photographs didn’t appear when the post transferred automatically to Facebook. 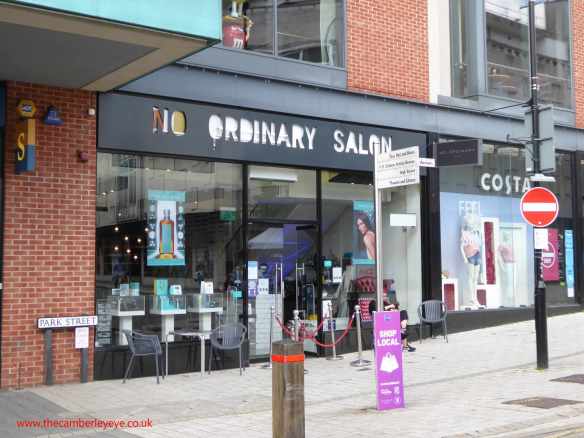 We’re not sure that the sign in red complies with ‘the rules’ about road signage.  But it does show how exclusive Camberley has become…..

(But, come to think of it, Bentley is part of the VW group.  Hmm, dieselgate.  How easy it is to damage a brand.)

We’ve praised the council before for its decision to make parking essentially free for shoppers.  But it would have been even better if the notice said that you can ignore the pay machines and just drive up to the exit barriers of Main Square car park if you’ve stayed for less than four hours.  Otherwise, how do you know?  You could – as we did – take a gamble and risk holding up cars behind us at the barrier while we popped out to ‘not pay’.  A bit of unnecessary hassle and stress, though.

Do contribute an item – thoughts, news, events – to the ‘Eye’

Simply click here and add your contribution to the resulting form. Anything about Camberley, past present or future, good or bad, is of interest, and we'll do our best to add your input to this site. But nothing rude or libellous please.

The town of Camberley can really be said to have commenced with the arrival of the Royal Military College in 1812, from Marlow, Bucks, and with it came people whose livelihood depended on the College. A new township was formed, and it was called New Town, because of the obvious. The name of Camberley did not exist in these times, and it was part of an area referred to as Bagshot Heath, which was a popular haunt of Highwaymen, including William Davis, known as the Golden Farmer, as he always repaid his debts in gold. Also known to frequent the Heath was Claude du Vall, Thomas Simpson and Whitney, the butcher. They all ended their days at the end of the hangman’s noose, but not before becoming part of the history of this area. At the end of the 18th century, the population was said to be less than 100, the only settlements being isolated cottages and farms, traversed by tracks used by mail coaches on their way from London to Exeter, Portsmouth and beyond. New Town grew, and by 1831 it was deemed necessary to change its name to York Town, after Frederick, Duke of York, who was the Commander in Chief of the British Army when the R.M.C. was formed in 1799. At the time of the name change the population was 702, with 407 males and 295 females. In 1862 the Staff College was built, and another township formed, this time taking the name of Cambridge Town, after the then present C in C of the British Army, the Duke of Cambridge. Queen Victoria and Prince Albert took a keen interest in the Staff College, and visited it shortly before the Prince died in 1861. The town continued to grow and the poor old Post Office got confused and attempted to deliver mail in Cambridge, instead of Cambridge Town. Understandably, the residents got annoyed and upset, so on the 15th January 1877, the Post Master General changed the name to Camberley. The commonly held explanation for the name is that it derived from Cam, a small stream that flowed through the town, Ber, after Amber Hill, which was depicted on an old map of the area, and Ley, meaning pasture land or shelter. With the arrival of the railway in March 1878, the population really started to expand, and by the end of the century it had reached 8,400, and Camberley was becoming the place to retire to, because of its healthy air, due to the vast number of pine trees, which were said to be good for those suffering from pulmonary disorders. The First World War took a toll on the young men of the town, as it did up and down the country, with 233 lost. The Second World War took a further 140, but the town recovered, and continued to prosper and grow. In 1953 the first residents moved into the new Old Dean Estate, and later it became the new home for some of the London overspill. To accommodate them, the Doman Road Trading Estate was built to provide work. By 1961 the population had increased to 28,552, and it was decided to rip out the centre of the town to provide a new, modem town centre. At the present time a further development is being constructed on land west of Park Street, to keep pace with the growing population, and its needs. It has come along way since Daniel Defoe described the area in 1724 as: ”as a vast tract of land, some of it within 17 or 18 miles of the capital city, which is horrid and frightful to look at, not only good for little, but good for nothing, much of it a sandy desert, and one may frequently be put in mind of the Arabia deserts.”